The History of Heavy Rescue

The History of Heavy Rescue

On May 17, 2019 a new heavy rescue truck was placed in service with Rescue 1. Built by Supervac Incorporated on a Spartan chassis, this truck is the latest in a long line of rescue vehicles to serve the citizens of Philadelphia.

Coinciding with the opening of the new Fire Headquarters station at 1328 Race Street, Rescue 1 was placed in service on July 29, 1926. The company was under the command of Captain Clifton Ball and Lieutenant Alfred Broadbent and had eighteen hose men assigned, divided into two platoons. Selection of members for the new company was based not only on their prowess as fire fighters, but on their skills as tradesmen such as carpenters, riggers, and welders.

Rescue 1 entered service with a 1925 American LaFrance rescue truck. Equipped with various drills, torches, heavy lifting appliances, a life gun, and a life net, the apparatus was essentially a tool box on wheels. The company was also issued four different types of masks: Draeger smoke helmets, McCaa masks, Burrell masks, and Atmos masks. These masks enabled the fire fighters assigned to the rescue squad to work safely in smoke and various types of chemical fumes, such as acids and ammonia.

“It is necessary to have a special squad with the newest sort of apparatus to fight the modern fire” said Chief Engineer Ross B. Davis in a newspaper interview. “You must have tools for cutting through steel and concrete as well as for rescuing people trapped in tall buildings. The work is not easy. We have selected our men with the utmost care. It was difficult to pick out twenty men from the list of one hundred, for all were good. The rescue company has proven to be a success as well as a necessity. Formerly a rescue company was considered to be unnecessary, but we find we must adopt new methods to suit new conditions.”

Responses for the Rescue were box alarms in the high value section of the city, commonly referred to as “river to river, Vine to Pine”, and second alarms and special calls city-wide. Chief Engineer Davis had plans to place a total of four rescue companies in service, stationed strategically around the city, but the Great Depression followed by political turmoil within the Bureau of Fire during the 1930’s stymied these plans.

Age and providing city-wide coverage took its toll on the apparatus assigned to Rescue 1. During 1941, the 1925 American LaFrance was replaced. The company was assigned a 1941 Ward LaFrance 1,000 GPM pumper, one of sixteen such pieces purchased that year. No hose was carried on the apparatus. The tools and equipment were stored in the hose bed, covered by a tarp. Assigning an engine to the Rescue was supposed to be temporary, but plans to purchase a rescue truck for the company had to be placed on hold due to the onset of World War II. As a result of the United States’ entry into the war, restrictions were placed on purchases of all vehicles and equipment deemed necessary for the war effort.

Beginning approximately 1948, the rescue companies began to be dispatched to medical emergencies. As the number of these responses began to increase, it was realized the Bureau of Fire was not utilizing its resources wisely. A truck staffed with a crew of six and equipped with specialized tools and equipment was not needed for the medical runs. Also, there was the risk the heavy rescue would not be available for a fire or rescue due to being assigned to a medical run. To counter this problem, five Auxiliary Rescues were placed into operation on May 1, 1951. The Auxiliary Rescues, staffed by a crew of two fire fighters detailed to the unit, would be dispatched to the medical calls, eliminating the need to dispatch a heavy rescue. This was the beginning of the Department’s foray into emergency medical services.

In 1957, Rescue 1 received a new piece of apparatus. The company was assigned a heavy rescue built by Allegheny Fire Equipment on an International chassis.

With demand for the light rescues continuing to increase, Rescues 1 and 2 were converted to light rescues on February 11, 1963. The department felt the services provided by the heavy rescues was redundant with those provided by the engine and ladder companies. In the event the specialized equipment assigned to the heavy rescues was needed, the apparatus formerly assigned to Rescue 1, the 1957 International / Allegheny Fire Equipment, and Rescue 2, the 1950 Brockway / Approved Fire Equipment, were stored at Engines 8 and 7 respectively. Eventually, the heavy rescue apparatus was reassigned to other city agencies and the specialized tools and equipment reassigned to companies scattered across the city.

Fire Commissioner Roger M. Ulshafer issued General Memorandum 89-156 on December 11, 1989, announcing his intention to place a heavy rescue unit into service. After assessing the department’s ability to deal with a variety of incidents the department could encounter, it became apparent specialized expertise, training, and equipment was lacking. Three of the incidents reviewed were the trench collapse at 3901 Roosevelt Boulevard on September 30, 1988 that took the lives of several plumbers, the eight-alarm fire at the Penn Mutual Life Insurance Company at 530 Walnut Street on May 30, 1989, and the four-alarm fire aboard the restaurant ship “Moshulu” at Walnut Street and the Delaware River on July 11, 1989.

It was determined that approximately $160,000 worth of equipment would be required to place the rescue in service. Since the city of Philadelphia was once again experiencing a period of financial distress, funding to purchase the necessary equipment and training would have to be found without taking money away from other department operations. To get the company in service, Operation Third Hand was created. Since the department is forbidden to accept monetary donations by city charter, a wish list of equipment and training was created. The list was then distributed throughout private industry. Corporations interested in helping could purchase an item on the list and donate it to the department. They could also sponsor specialized training sessions. Through the generosity of the private sector, a large portion of the training and equipment needed to place the unit in service was obtained under the auspices of Operation Third Hand.

A 1979 Ford / Hesse soda delivery truck was donated by the Coca Cola Company of Philadelphia. The majority of the company’s equipment could be carried in its ten compartments, but only two fire fighters could ride in its cab. To counter this issue, a 1979 American LaFrance pumper, that could accommodate four fire fighters, was modified by the Shops to provide additional storage space to carry equipment assigned to the Rescue. On March 25, 1991 Rescue 1 was placed in service in the station of Engine 29 at 4th Street and Girard Avenue. After an absence of more than twenty-eight years, the Philadelphia Fire Department was back in the heavy rescue business.

The “Coke Truck” was replaced on August 20, 1992 with the arrival of a new truck built by Saulsbury on a Spartan chassis. Rescue 1 now responded with one piece of apparatus, with the exception of the runs requiring the response of the Collapse Unit. The Spartan / Saulsbury was placed into reserve status when a new rescue built by KME was placed in service on January 20, 2003. The domino effect on the apparatus assigned to Rescue 1 continued when the current apparatus was placed in service on May 17, 2019 with the 2002 KME being reassigned as a spare.

It is ironic that the rescue was reorganized in 1991 for nearly the same reasons it was placed in service during 1926. What Chief Engineer Ross B. Davis said in 1926 rings true today, “Formerly a rescue company was considered to be unnecessary, but we find we must adopt new methods to suit new conditions.” I’m sure retired Fire Commissioner Ulshafer would agree.

Have you been to our store? We are your source for official Philadelphia Fire Department merchandise. Including this great Rescue 1 patch. 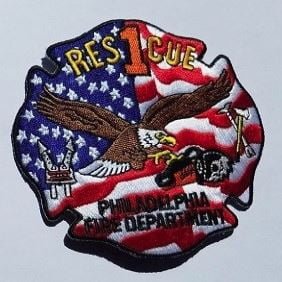